Parts of the world have been celebrating the holy ascension of Jesus Christ with chocolate bunnies and vividly painted eggs since the 15th century. “Easter” is thought to have come from Eostre, the Goddess of Dawn or Springtime with egg-laying rabbits associated with fertility. Here at Puzzle Box we’ve also adopted the annual custom of doodling on eggs, hiding eggs and then hunting for said eggs; a clear display of expertise in ovum art and obfuscation. We’ve been incorporating Western ways of celebrating Easter into our own, and we almost forget where our roots clung onto, but we digress. 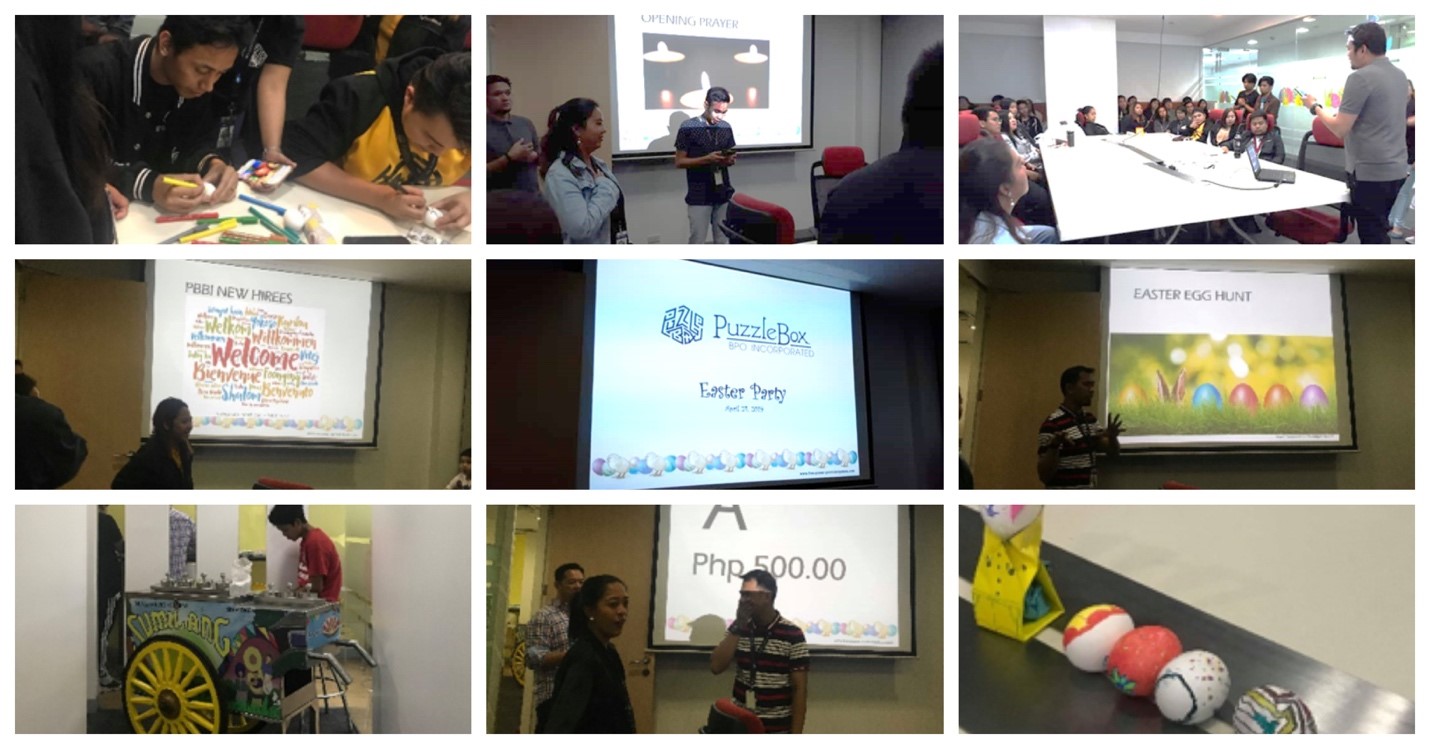 There were newbies singing, overloading of brain-freezing Pinoy sorbetes and several rounds of original PuzzleBox bato-bato-pik battles that has already become tradition. The piece de resistance is the Eggstreme Makeover contest, either your egg would end up looking like a Geisha or a Drag Queen.

By tradition, Filipinos would start the remembrance of the hardships of Jesus Christ with Ash Wednesday, wherein members of the clergy would smudge a believer’s forehead with ash ideally in the shape of a cross. It marks the first day of Lent or “Kuwaresma”, a forty-day period during which Christians often abstain from eating meat during the Holy Week leading up to Easter Sunday.

Another Puzzle Box tradition that we do during Christmas and Easter is called “Letting Go”. A sort of Mari Kondo-style of parting ways with trinkets and tokens, but the great thing is the objects that actually spark joy in your life are the ones that you have to give away. Awwww!

There are considered benign ways of observing the Lenten Season like fasting, Visita Iglesia for religious wanderlusts, and passionately reading slash singing lines from the “Pasyon” inside makeshift altars scattered around rural towns. As we were perusing the origins of Easter and its evolution, we’ve stumbled across fascinating stuff that we wanted to share with you about how a story of a gruesome death followed by a miraculous revival is revered here and abroad. 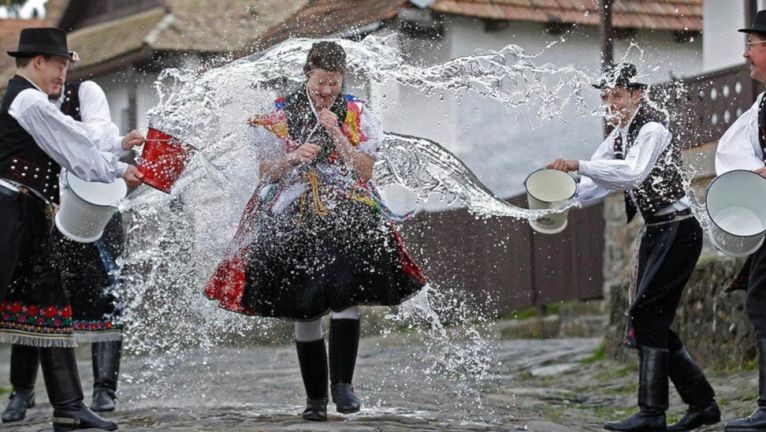 In Hollókő, a tradition of men sprinkling perfume or a bucket of water on women based on an old pagan fertility ritual is observed. It was a form of courtship in the past and if you have a lot of ‘suitors’, you’ll end up smelling like the department store’s eau de parfum section. In exchange for getting doused, women give men chocolate Easter eggs, home-made cakes or a shot of Hungarian fruit brandy called palinka. “Egészségére!” That’s Hungarian for “Cheers!” (Image Source: www.travelzin.com) 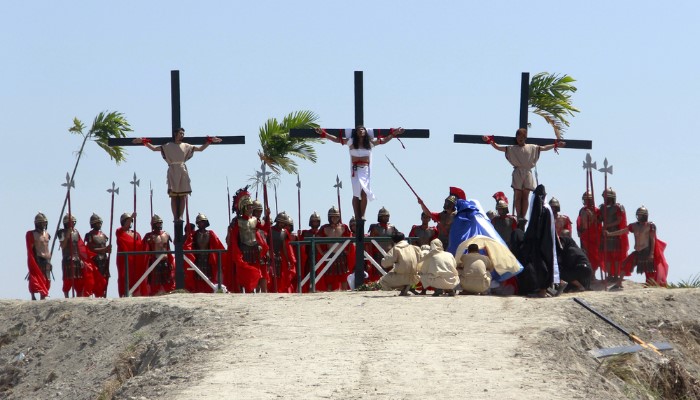 The re-enactment of the Crucifixion is held annually in the middle of a field atop a little hill in a village in San Pedro Cutud, San Fernando. Locals and foreign tourists flock to this spot to bear witness to a few individuals’ way of atoning for their sins. A 58-year-old man had both his hands and feet nailed to a cross for the 33rd time this year. He has pronounced that he would partake again next Easter as his final minutes of painful devotion ends in 2020 upon retirement. (Image Source: explore.traveloka.com) 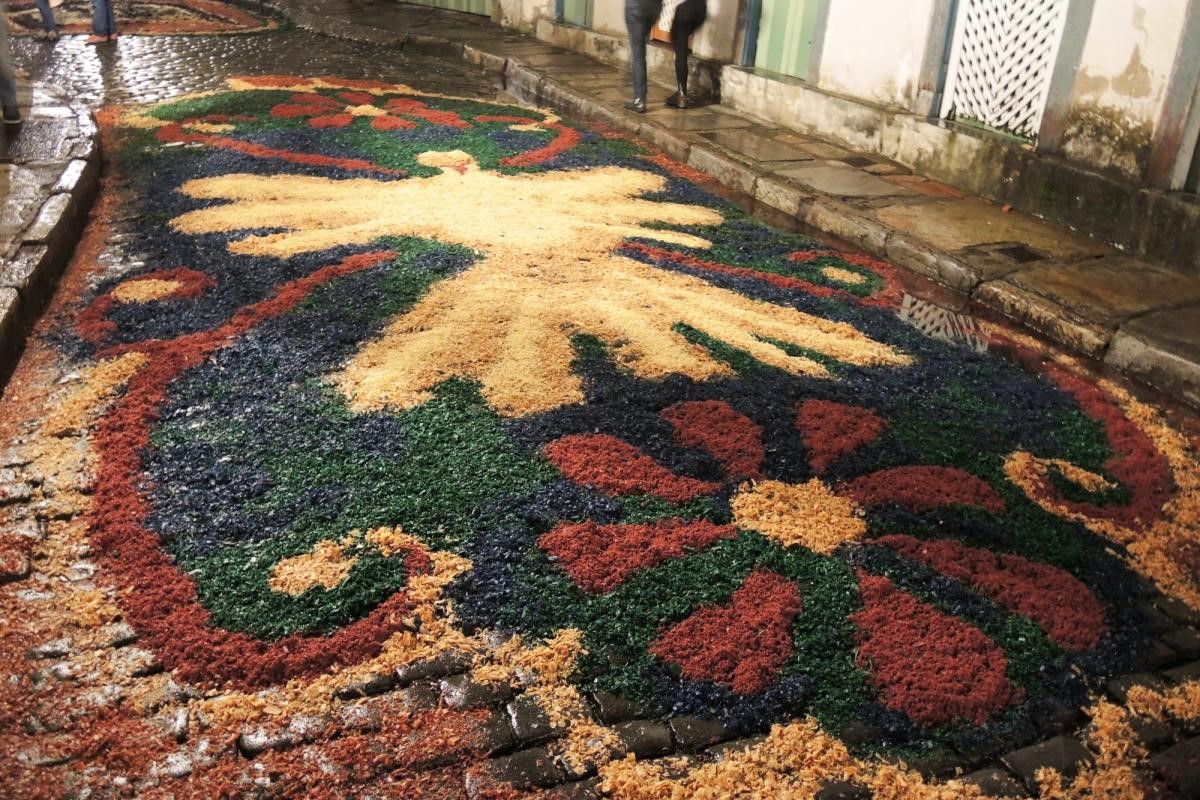 The Saturday night before Easter, townspeople would decorate their assigned section of a majestic 1-kilometer street stretching from Matriz de Nossa Senhora do Pilar church to Nossa Senhora de Conceição church. They use flowers, artificially-colored sand, and sawdust to create ornate patterns as a tapete or carpet, a tradition that began in 1733. This probably how the red-carpet treatment started in Hollywood but in a more spiritual and artistic way in welcoming the biggest celebrity during Easter. (Image Source: www.catholicsandcultures.org) 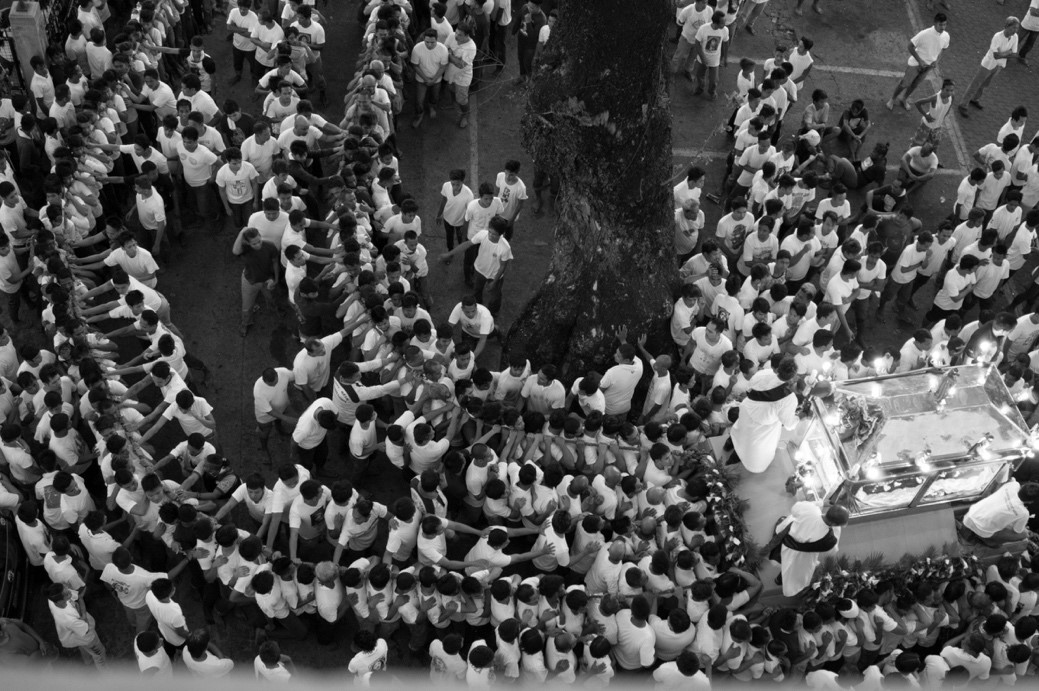 The “Amba” procession has been an annual solemn promise of men, and a few women in San Isidro Taytay, Rizal wherein they will literally pull the Santo Entierro (Holy Burial), a heavy ornate casket on top of a carroza, using maritime vessel-grade ropes stretching as far as the eyes could see. The relatively narrow winding streets of Taytay and the cumbersome casket makes the whole ordeal frightening and mesmerizing at the same time.  (Image Source: medium.com) 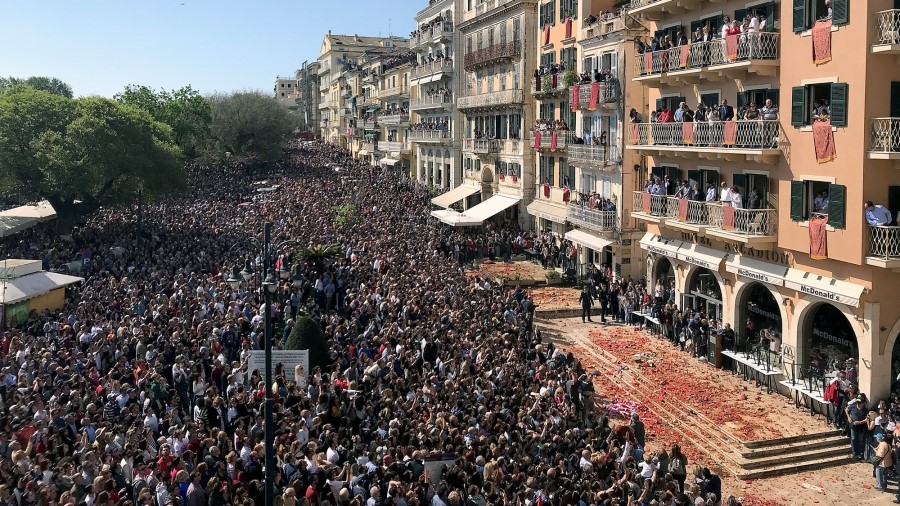 Referred to as the “botides”, large clay jugs filled with water are thrown from the balconies of homes in the center of town smashing them into pieces. Corfiots believe that the ritual wards off bad spirits, and spectators may take home pieces of the smashed pots for good luck. (Image Source: pri.org)

Now those are great additions to our bucket list of places we could fly off to next Easter and not be limited to just eggs and bunnies!

Celebrating Easter is very much like Christmas to us Filipinos, but with a real dose of humility and compassion. We honor the Divine by living a life worth celebrating and we can do this by thinking, talking, and walking with purpose.

Let’s all be grateful for the blessings that will come our way and we hope you had as much of a fun Easter as we did!